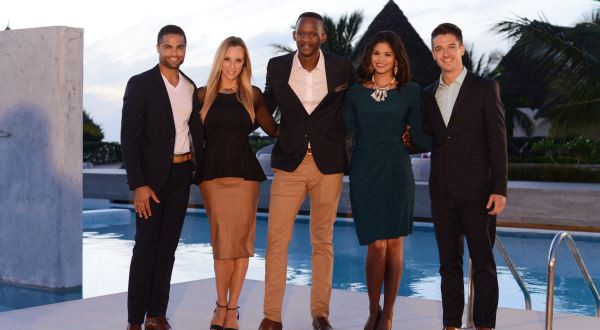 The search for SABC3’s top new presenters has come to an exciting conclusion. After 12 weeks of challenges, the final five contestants – Christopher Jaftha; Danilo Acquisto; Jade Hubner; Khanya Siyengo; and Zoe Brown – faced off against each other in a nail-biting grand finale on the tropical island of Zanzibar.

In a grand pool-side ceremony, the Top 5 waited anxiously for the judges to reveal who would be stepping into the spotlight as the three winners, and which presenting gig they would each get.

First announced was 25-year old Zoe Brown as the winner who will shine on live television by joining Expresso. The next winner to be revealed was Johannesburg-born Danilo Acquisto, who will work on the brand-new weekday afternoon show Afternoon Express alongside judges, and now co-hosts, Bonang and Jeannie. The third and final winner to walk away with a presenting spot on the glamorous Top Billing, is 23-year old Jade Hubner.

SABC3’s head of bouquet, Aisha Mohamed said, “Our top three finalists have really exceeded our expectations this year! It’s not easy finding a presenter, let alone three who have all the qualities to appeal to our vast audience. We wish Zoe, Jade and Danilo much success as they pursue their dreams on Expresso, Top Billing and Afternoon Express. May their careers continue to grow from strength to strength.”

Not only have these three won dream presenting jobs, but thanks to the show’s sponsors, each of them will get to drive a luxury Mercedes-Benz for a year; receive R10 000 from Nedbank; and with a presenter needing to look stylish at all times, what better way than with a R50 000 Woolworths gift card to take care of all their fashion needs.

Presenter Search on 3 is brought to you by Nedbank.