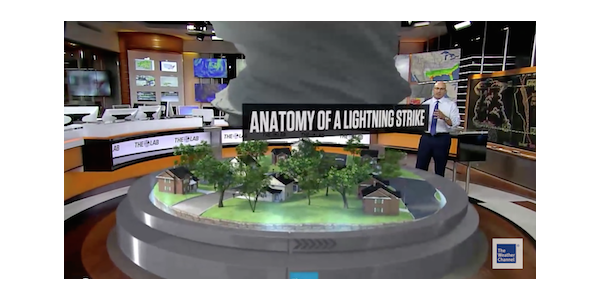 On 20 May, 2015, a new chapter opened in television weather presentation – The Weather Channel® introduced the first of its live augmented reality presentations, which allow meteorologist Jim Cantore to interact with spectacular 3D graphics. Giving the presenter and camera complete freedom of movement is Ncam Live, the low latency real-time camera tracking system.

“We’re bringing the outside into the studio,” said Jeremy Jones, director of television products at The Weather Channel. “If we want to explain a tornado, for example, we’ll have a realistic 3D graphic of it come to life in the studio. The presenter will be able to walk around and explain the dynamics of a tornado to our fans live.”

The Weather Channel is the best known name in weather programming for television and is continually striving for more engaging, more dynamic presentation of the science behind the weather. This was the driving force behind its determination to move on from the traditional weather forecast style of a presenter in front of a green screen map.

Ncam and The Weather Channel’s technical team worked closely to develop smooth integration with the company’s existing technology, including TruVu Max from WSI, The Weather Company’s professional division, Vizrt graphics and the production system that allows the creative and operational team to design and operate the graphics on air. The Ncam tracking system provides a stream of extremely accurate positional information, without the need for special markers in the studio, whether the camera is on a pedestal, a Steadicam or even hand held.

The result is that the presenter is free to move around stunning graphics sequences, such as how a tornado forms and develops. While both the camera and the presenter have full freedom of movement, Ncam keeps the graphics precisely fixed to a location.

“We set out to create an affordable, effective and flexible real-time augmented reality system, with latency low enough to be used in live television,” said Nic Hatch, CEO of Ncam. “The project at The Weather Channel is extremely exciting: they are creating very compelling television moments several times a day, really getting inside the weather.

“You see a lot of virtual and tracking systems, but they are clunky and heavy and hard to integrate, usually using their own graphics software,” concluded Jones. “Ncam is portable, and it is true plug and play. It integrates with our software and it is completely flexible. Ncam is 100 percent unique.”