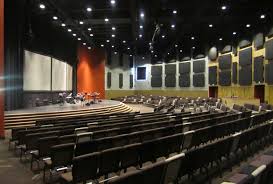 When Highpointe Church in Oklahoma City was zapped in an August 2013 electrical storm, demolishing the main building’s electrical systems and all connected lighting and audio equipment, its leaders called on 35-year-veteran systems integrator and designer Enginuity. Headquartered in Tulsa, Enginuity was asked to design and install new systems for the 1980s-vintage, 680-seat sanctuary, including a state-of- the art PA system from Fulcrum Acoustic.

“The lightning strike was apparently a static air burst that came through the wiring in the ceiling, destroying everything local in the building,” says Enginuity CIO Tom Johnson. “Thermostats exploded, the main power transformer was ruined, wiring melted throughout the building, keyboards onstage were ruined, and pieces were blown off the mixing console. The conduit in the floor had previously collapsed, and much of it had melted wire that we couldn’t get out.”

In the end, the project cost $2.6 to $2.7 million and took 19 months. “Everything had to be redone,” recalls Johnson. “We built a new electrical room and installed a new transformer, which was cooled and sound isolated. We did extensive acoustic work and built a new set design for the stage. When we installed the new sound system, we couldn’t use the old conduit, so we ran redundant CAT5 and audio lines to the speaker boxes. All of the wiring fit in a 1 ¾-inch conduit.”

Highpointe is an Assembly of God church with contemporary services. “It’s a rock ‘n’ roll church with a seven- to nine-piece band,” notes Johnson. “They play louder than in most churches we’ve done, so they needed a very powerful and precise system that could deliver the sound just to the seats and nowhere else.”

To accomplish this, the Enginuity team chose three custom-built Fulcrum LCR clusters, each with three powered DX1565AC dual 15-inch cabinets with 60-degree vertical by 40-degree horizontal dispersion-an unusual configuration. The centre boxes have rotated horns. Each of the nine cabinets is driven by two 1,500 watt modules for a total of 3,000 watts per cabinet.

“We use four powered FA28ac dual 8-inch coaxial loudspeakers as front fills, plus four dual 15-inch TS215 direct-radiating subwoofers in the centre of the stage, which are tied only to the centre cluster,” Johnson explains. “For sub-lows, we have four TS221 dual 21-inch direct-radiating subwoofers that are ground-stacked on the left and right of the stage. We power the subs with Powersoft K20 2-channel power amps that put out a total of 32 kW.”

DSP is supplied by two Symetrix units. The church’s Yamaha CL5 digital mixer is Dante-equipped and connected via fiber to the neighbouring youth building so audio can be sent bi-directionally between buildings.

In a job this extensive, almost everything is a challenge, but the rigging for Highpointe Church was especially complicated. “The roof is 62 feet high, and we could only fly the loudspeakers in a few places. The stage had been added to three different times, and each time they built a new ceiling, one on top of the other. The triple ceiling was a rigging nightmare. The two main support beams are 12 feet tall and 2 feet wide, and we drilled through those and made custom rigging mounts, while making sure we were only putting sound where seats are. We had to use all custom hardware,” remarks Johnson.