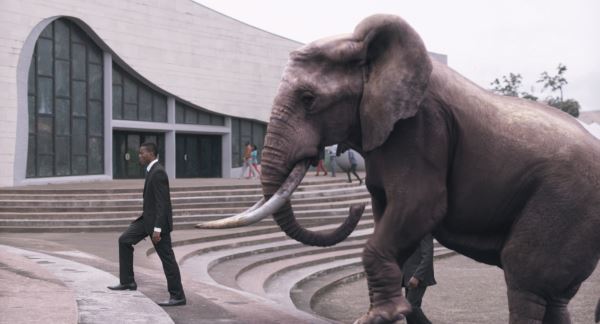 The first Ivorian feature selected to premiere at the Cannes Film Festival, where it competed in the Un Certain Regard section in 2014, the film was one of a handful of African films to make an impact in that year with the Hollywood Reporter stating: “The current hotness of African cinema just got a little hotter with the maturation of this promising new talent.”

At the African Film & Television Festival of Ouagadougou (FESPACO), Run took home the Prix du Conseil de L’entente for its themes of peace, brotherhood, and solidarity.

According to IndieWire its New York premiere this year was a “star-studded event” with a flurry of excitement when the movie’s star actor Isaach de Bankole strode through the packed lobby of the Lincoln Centre to meet Lacôte. Ivorian born Bankole has appeared in more than 50 films including Jim Jarmusch’s Night on Earth, Ghost Dog: The Way of the Samurai, Coffee and Cigarettes and The Limits of Control, as well as in the 2006 James Bond film Casino Royale.

The film follows Run (Abdoul Karim Kaonate), a man living three lives, is running away. He has just killed the country’s prime minister and takes on the face and clothes of a madman wandering through the town’s streets. His life returns to him in flashes: first his childhood with master Tourou, when he dreamt of becoming a rainmaker; next his incredible adventures with Greedy Gladys, a professional eater; and then his militia past as a Young Patriot, one of the fiercest supporters of former president Laurent Gbagbo in Ivory Coast’s political and military conflict.

But Run has not chosen all these lives. He has stumbled upon them, escaping from one life only to find another along the way. His whole itinerary “is a cautionary journey focused on violence” says the director “and how we can fall into it.”

Beautifully shot by Israeli cinematographer Danile Miller, brilliantly cast with great performances, Run also observes how such a character copes with living in a crisis-stricken country. His quest for peace and happiness seems only to bring further pain in a beautiful world filled with chaos and brutality.

“Ï wanted to show that the country is made of all this diversity, all the more so as over a quarter of its population is foreign. Ivory Coast is a microcosm of the whole of Western Africa,” says Lacôte.

Run was developed with the support of the Jerusalem-based Sam Spiegel International Film Lab and went on to win its top prize in 2012. The movie was then produced through the Paris-based Banshee Films and Abidjan-Based Wassakara Productions in which Lacôte is a partner.

Run will be screened at the Labia Theatre in Cape Town and the Bioscope in Johannesburg from 22 to 28 April 2016 as part of the African Screen Network Series.