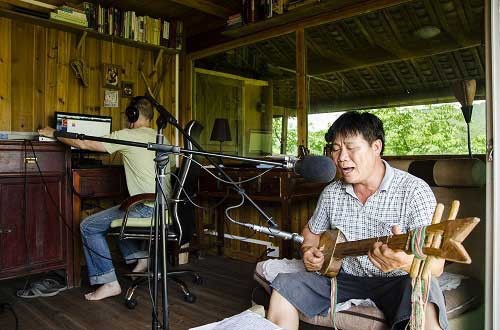 The Dong are a singing people with a heritage steeped in history and legend, having lived for centuries in southern China maintaining a rich singing tradition. As mainstream Chinese culture pervades the community, a project has been launched to record and preserve their music, using the compact, portable USB audio interface, iD14 from Audient as an integral part of the recording setup.

“As young people leave Dong villages to find work in bigger cities, traditional Dong song is at serious risk of extinction,” explains Noah Krieg, a cultural anthropologist with a background in pro audio sales, who has undertaken this extraordinary project. Joining with local musicians and singers with support from concerned international partners, he aims to record the traditional Dong songs in audio form, and make them accessible to the world.

Krieg is in the ideal position of being immersed in the community, having moved to a Dong village upon completion of graduate studies in Dong culture at Hunan University last year. Currently a grass roots endeavour, he anticipates this to be a long term project that will gain traction and support as recordings start to be collated. “We will work with the local government to publish and distribute these songs throughout the Dong areas and online to be enjoyed by locals and visitors alike,” he continues.

Krieg is also keen to give some of the recordings a more modern twist. “We will work with the raw audio and integrate modern musical elements to make the Dong songs more accessible for a generation of ethnic Dong who might feel the traditional music is out of touch.”

Traditionally, song has been integral to every aspect of Dong life: singing at meals, singing in courting, and especially singing for education. The entirety of Dong history, legends, moral teaching, and folk religion practices has been passed down from generation to generation orally through song.

Legend has it that long ago the Dong were unable to sing. When a villager named Xi Ai heard a mountain bird tell of a singing tree in heaven, he decided to go up and steal some songs which grew as fruit on the tree. The songs were taken back to the village and planted in the ground, where they grew up into a new singing tree. The Dong people gathered with the mountain birds to learn the beautiful songs, and ever since the sound of singing has filled the hills where the Dong people live.

Check back with Audient to find out how the project is progressing, or pop over to Soundcloud now to listen to some of the initial recordings, here.