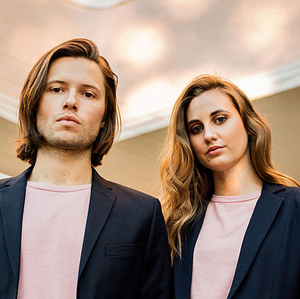 Emma de Goede (vocals/piano) and Gerrit Matthee (producer/multi-instrumentalist) formed Emerger while studying music at the University of Cape Town. Emma graduated with a BMus in Jazz Performance, while Gerrit completed his BMus in Classical Composition. The two have been making music together since high school.

Their debut single, ‘Break & Fall’ was a winner of the Avid and Abbey Road Studios International Song Contest, picked from nearly 5000 international entries. They had the opportunity to travel to Abbey Road Studios in London for the mastering of this winning song. The Los Angeles based producer and judge of the contest, John Feldmann (Blink-182, Panic! at the Disco) said: “They have a great cinematic landscape to their music. They have a good image and are a good example of what modern music can be.”

Since the release of their debut mini-album ‘Bloom’ in May 2018, Emerger has been making waves both nationally and overseas. They were selected as Apple Music’s New Artist Spotlight for the month of July. ‘Break & Fall’ has been playlisted in 2 Apple Music playlists: The A-List: Alternative; The A-List: South Africa and is currently featured in Apple Music’s Best of 2018 Editor’s Picks playlist. The album was also featured in the Best of the Week playlist for the week of 25 June and in Apple Music’s 10 Albums You Must Hear This Month (July). Their singles ‘Hindsight’ and ‘Nomadic Love’ has been played on BBC Radio as part of the BBC Introducing show. ‘Hindsight’ and ‘Urban Wilderness’ was also selected as a “Fresh Fave” on the UK blog Fresh on the Net. ‘Break & Fall’ and ‘Hindsight’ have also been playlisted and featured on South African radio stations such as MFM, TuksFM, PukFM, Bok Radio, Bush Radio and SmileFM.

‘Bloom’ was written, recorded and produced by the duo. To finish off the album, some of SA’s best sound-mixers and producers worked on ‘Bloom’ as well, such as Johnny de Ridder (Fokofpolisiekar, Francois van Coke), David Langemann (Freshlyground, Medicine Boy) and Andrew Rawbone-Viljoen (Diamond Thug, The Plastics). The album was mastered by Christian Wright (Radiohead, Ed Sheeran, Coldplay) at Abbey Road Studios in London.

On 18 January 2019, Emerger hosted their sold out Live Launch at The Raptor Room in Cape Town. Since then they have played stages such as Café Roux, House of Machines, Aces ’n’ Spades, Mercury Live and appeared live on SABC 3’s Expresso Morning Show.

Emerger released their ‘Break & Fall Versions’ EP on 15 February 2019. The duo is currently in studio, working on new single releases and will be continuing to perform in and around Cape Town. ‘Bloom’ Vinyls and CD’s are also available for sale at they’re shows and at Roastin’ Records in Cape Town.

All session by Emerger